Providing a comprehensive introduction to modern auction theory and its important new applications, this book is written by a leading economic theorist whose suggestions guided the creation of new spectrum auction designs. Aimed at graduate students and professionals in economics, this volume provides the most up-to-date analysis of traditional theories of "optimal auctions" as well as newer theories of multi-unit auctions and package auctions, and shows by example how these theories are used. It explores the limitations of prominent older designs, such as the Vickrey auction design, and evaluates the practical responses to those limitations. 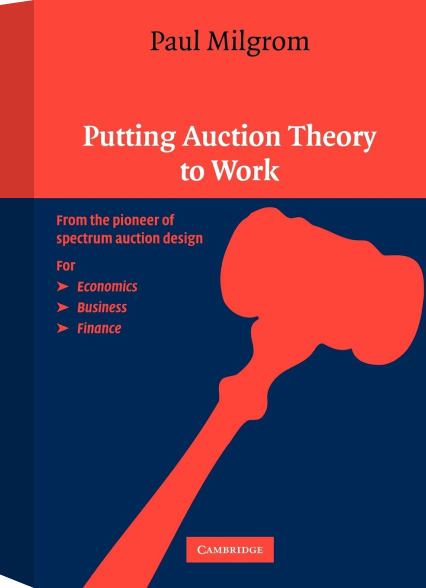 Paul Milgrom is the Leonard and Shirley Ely Professor of Humanities and Sciences and Professor of Economics, Stanford University. He is the author of more than sixty articles and co-author of the influential textbook, Economics, Organization and Management (Prentice Hall, 1992). Professor Milgrom is a pioneer in the economic theory of auctions and co-designer of the simultaneous, multiple round auction that the FCC adopted for selling radio spectrum licenses.

"Whether you are an expert on auction theory or just a novice curious about how auction theory works, you will be in for a marvelous journey. There's no one better at capturing the essence and generality of economic ideas than Paul Milgrom. He's a master in a class of his own."

"One of the recent revolutions in economics is an understanding that markets do not automatically work well. Design matters, and the...spectrum auction design that Milgrom pioneered kicked off a new era of market design using economic theory to make real markets work better. Now, Milgrom makes the underlying ideas and theories more widely accessible--so other markets too will reap the benefits of these insights."

"In Paul Milgrom's hands, auction theory has become the great culmination of game theory and economics of information. Here elegant mathematics meets practical applications and yields deep insights into the general theory of markets. Milgrom's book will be the definitive reference in auction theory for decades to come." Roger Myerson, University of Chicago

"Paul Milgrom has combined fundamental work in economic theory and, in particular, the theory of auctions, with extensive practical participation in the auctions of the electromagnetic spectrum. This book is a brilliant synthesis of his own and others' contributions to the field. The impact of practical problems on the need for theory is thoroughly exemplified. The exposition of the theory has that complete ease only achievable through complete mastery and intense work."

About us
Careers
Newsletter
Topsort Blog